History of the Academy

GreatMartyr Euphemia Orthodox Theological Academy is an pan-Orthodox institution of higher learning offering a two-year program of study (offered in English and Arabic) leading to the Diploma of Orthodox Theological Studies (Dipl. O.T.S.), and a one-year program leading to a Certificate in Preaching, and advanced courses for clergy and laity which qualify as Continuing Education Courses, both offered in English.

The mission of GreatMartyr Euphemia Orthodox Theological Academy is to serve the Orthodox Church by preparing students for service to the Church. The Academy welcomes applicants not only from the United States but also from abroad, thereby serving its mission to serve the Church in all corners of the world.

Beginning in the mid-1990’s, the administration of the current Vicariate for Palestinian and Jordanian Orthodox Christian Communities in the United States has worked diligently for the improvement and spiritual nurturing of the Orthodox Christian faithful in its parish communities by way of missions, established parishes, the ordination of clergy, youth camps, and organized opportunities for continuing education. Originally focusing on descendants of the Holy Land specifically, it soon became clear that spiritual education among Orthodox Christians of Arabic descent in the United States, and in the Arabic language specifically, was lacking in the extreme. Opportunities to serve these Orthodox faithful abounded but administrative and clerical resources could not keep up with the growing need.

From 2008 until 2013, the clergy brotherhood strove to serve the ever-growing number of Arabic faithful who longed for pastoral care and spiritual nurturing. New missions, summer camps, continued along with a growing number of American converts joining the historically Arabic structure of the Vicariate. New deacons and priests were ordained, and general growth continued, but the overarching need for religious education remained a dominant concern. There were simply too many faithful for the clergy to educate effectively via face-to-face gatherings.

Then, in 2014, the wise planning of the Archiepiscopal Vicar the V. Rev. Father George Jweinat, with the blessing of His Eminence Archbishop Demetrios, Geron of America, and with the cooperation of His Eminence Metropolitan Damaskinos of Didymoticho Orestiada and Soufli, culminated in obtaining from the Orthodox Church of Greece the young and well-respected Archimandrite Damaskinos Alazrai for leadership assistance and the administrative development in the Vicariate. The V. Rev. Father Damaskinos, PhD, was elevated to the title ‘Archimandrite of the Ecumenical Throne’ by His All Holiness Ecumenical Patriarch Bartholomew, before his transfer to the Vicariate in the United States. Archimandrite Damaskinos is of Jordanian birth but resided continuously in Greece for approximately 15 years where he studied theology and received ordination.

The arrival of Archimandrite Damaskinos Alazrai allowed for aggressive growth in the area of Orthodox education and spiritual formation of the faithful. Immediately, an annual Bioethics Conference was established for each spring, with an annual Spiritual Retreat every October. Youth education began in each mission and parish where the Archimandrite visited regularly, and even more potential missions were identified nation-wide from California to New York.

Archimandrite Damaskinos’ work also, as a natural outcome of his international cooperation with Orthodox educators, revealed the desperate need for Orthodox education and spiritual formation of the faithful particularly in some Arabic countries where Christians are overtly persecuted, and even martyred, for their faith. It seemed that everywhere the Archimandrite traveled or made contact there were numerous Orthodox Christians desperate for spiritual nurturing. Truly,

In the meantime, the number of converts to Orthodox Christianity who were interested in the Vicariate’s ethos of theological traditionalism and pastoral boldness was growing as well. Several of the Vicariate clergy were focusing their pastoral effort and creativity on the second or third-generation, English speaking half of the Vicariate population. At a pan-Orthodox clergy conference, V. Rev. Father Thaddaeus Hardenbrook, rector of St. Lawrence Orthodox Church, Felton, CA, made contact with a dynamic convert priest by the name of Father John Peck. These two American priests hit it off from the start and spent many hours contemplating the practical needs for vibrant and evangelistic Orthodox Christianity on a national scale.

At the time, Father John Peck was serving in Phoenix, AZ, without specific pastoral assignment and soon found himself drawn to the zeal, sincerity, and pastoral conviction of the Vicariate clergy brotherhood. In 2017, Father John was officially released by the Orthodox Church in America (OCA) to His Eminence Archbishop Demetrios and assigned to reopening the parish of All Saints of North America in Sun City, AZ. Father John had previously served in Kodiak and Fairbanks, Alaska, in southern Illinois, Canton, Ohio, and Prescott, Arizona. He is the founder of several web-based educational programs and ministries such as ‘Good Guys Wear Black: Discerning Your Vocation in the Orthodox Church’ (goodguyswearblack.org), the ‘Preachers Institute: The World’s Premier Online Orthodox Christian Homiletics Resource” (preachersinstitute.com), and “Journey to Orthodoxy: For Those on the Path to the Orthodox Christian Faith” (journeytoorthodoxy.com).

By the grace of God, once the mission and vision of Archimandrite Damaskinos was communicated to Father John Peck, the natural outcome of their combined talents was the founding of GreatMartyr Euphemia Orthodox Theological Academy; an internet-based Orthodox learning institution capable of serving the Orthodox faithful nationwide, and even worldwide, in both English and Arabic.

As summarized in the Academy bylaws:

“The mission and vision of this Academy shall be to operate a theological, distance-learning institution, based predominantly online, which shall offer theological courses, professional and special courses, certificates and diplomas in education and theological training, qualification for ordination and related fields, as deemed appropriate by the Board of Trustees of the Academy with the express purpose of educating persons for Orthodox Christian ministries in church and society.”

Since that time, Fr. Damaskinos has been elevated to the position of Abbot of the Patriarchal Monastery of St. George in Cairo, where he continues to teach our Arabic language courses.

Therefore, it is with great joy, made possible only by the will of the Father, the direction of His only-begotten Son, and the grace of the Holy Spirit, that the sincere effort to serve the Orthodox faithful under their care, in as effective manner as possible, has developed into the founding of GreatMartyr Euphemia Orthodox Theological Academy, and the opportunity to serve whatever Orthodox Christians, and inquirers into the Faith, who choose freely to participate in the educational program of the Academy. 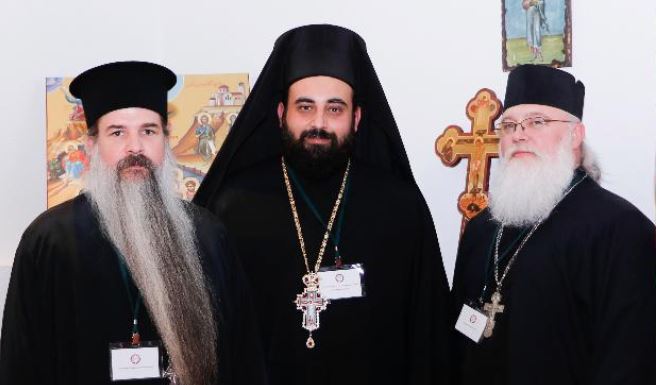 Glory to God for All Things!