Our Academy is focused on service to the Church, and today, that means in the fullness of the Orthodox faith. Our motto is taken from the words of St. Nikolai Velimirovich, who said,

“We must be super-conservative in preserving the Orthodox faith, and super-modern in propagating it.”

WHY ST. EUPHEMIA THE ALL-PRAISED? 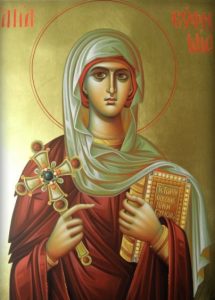 St. Euphemia was a virtuous maiden suffered resolutely for her faith in Christ early in the 4th century, and even more, through a profound and publicly witnessed miracle, directed the fathers of the 4th Ecumenical Council to the declaration of Orthodox Christianity. Her miraculous intercession freed the participants from the contentious quagmire the Council had fallen into, and earned her the title “All-Praised”.  This miracle is attested by a letter sent by the council to Pope Leo I of Rome:

She is a confessor of True Orthodox Christianity, a powerful intercessor, and a glorious Great Martyr in the Church of Christ.

She is a most excellent patron for our Academy. You can read more about her life here: Our Patron Saint.

The GreatMartyr Euphemia Orthodox Theological Academy has decided not to seek academic accreditation by any accreditation agency. Oversight by the Diocesan authority, the Dean, the Academic Advisory Committee, and the governing board will maintain a high standard of academic quality and assure that the mission and vision of the Academy are being accomplished.

Students will be assigned grades according to the following scale upon completion of each course:

Official transcripts of a student’s academic record are issued upon request of the student, and sent directly to other academic institutions, potential employers, or diocesan bishops. The fee for official transcripts is $20.00 each. Transcripts will not be issued unless a student has met all financial obligations to the School.

One unofficial transcript is sent to each graduating student upon request.

GreatMartyr Euphemia Orthodox Theological Academy merchandise and apparel can be purchased through the online bookstore. Show some support for your Academy! The bookstore will be operational soon. Return here to for the link.

In the footsteps of Apostolic Men & Women

Our faith is spread by faith, love, and witness. We will cross the bridge between book learning and personal action in helping others learn more about Christ, and the Church He founded for the salvation of all mankind. With zeal and boldness, the foundation of the Apostles and Saints will come alive for you, and for those you reach out to. If you desire to make preparations for further theological studies, especially with an eye towards preparing for the diaconate or the priesthood, this program is for you.