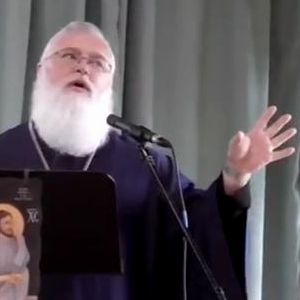 Fr. John A. Peck, Dean of GreatMartyr Euphemia Orthodox Theological Academy, is the rector at All Saints of North America Orthodox Church, Sun City, AZ. Fr. John was born and grew up in Detroit, Michigan, the oldest of four children. He grew up attending a Lutheran Church, where a love for God and for Scripture was well instilled. Moving to a suburb before high school, he worked from the age of 12 at various jobs through adulthood.

Attending Michigan State University in East Lansing, Michigan afforded him the chance to meet Deborah Robertson. A month after they met, he proposed, and they spent the next 3 1/2 years finishing school. There he started a service group called A.R.M. (Actions Reflect Morals) which provided labor for other local charities, helping the poor in various capacities from moving entire households of single moms to caulking windows in the middle of winter to weatherize poor homes – it was a busy time for those involved.

Getting married in 1984, they continued schooling, while starting a family. From stuffing envelopes, factory work, to midnight cashier, to Food Science labs where he made synthetic cow manure (he really did this), Fr. John continued working several jobs as necessary while applying to theological seminaries. While he was always accepted, he could never raise a dime of financial aid.

They converted to Orthodoxy in 1992 at St. Andrew Orthodox Church (MP) in East Lansing, MI.

After 13 long years of work, study, and prayer, in 1994, he decided that he would apply to go to seminary one last time, this time Orthodox seminaries, and if it was again impossible to go, he would accept the verdict of heaven in the matter. He was accepted at every Orthodox seminary he applied to, but was told that without about $20,000 in the bank, it would be a waste of time to try. Finally, he heard back from St. Herman Seminary in Kodiak, Alaska. With married housing available (eventually), they sold everything they owned and bought plane tickets, bearing their three children, Nathan (10), Benjamin (5), and 4 month old Joseph to the Seminary.

During his second year of study, Fr. John was told to not only teach several classes at the seminary, but also to begin administrating the seminary, and keep the lights on. By the end of the year, and with the addition of a second annual appeal, donations to the seminary tripled over the previous year. Once his three years were up and the program complete, he was ordained a deacon, and then a priest, and assigned to Fairbanks, then Anchorage, then Kodiak. In 1999 he requested a transfer to the Midwest to be closer to his dying father. Afterwards, he served missions and parishes in southern Illinois and Canton, Ohio.

His first work in new media was the Incarnation Broadcast Network, the first 24 hour Orthodox Christian internet radio broadcast in the world. He also established the first Orthodox seminary website in the world, and hosted the first Orthodox Media Guild gathering in Chicago in 2004, inviting Orthodox media ministries from around the country to plan how to use their new technologies to reach the unchurched.

Fr. John served as lecturer in Biblical Studies and Practical Liturgics for the Late Vocations programs of the OCA Diocese of the Midwest, and the Northeast Ohio Catechetical School for Theological Studies. He’s also been a Featured Homilist at Sermon Central.com, and a national partner and evaluator for the Academy of Preachers.

After his assignment in Ohio, Fr. John took over as Executive Director of the Helen Foundation Clinics, a medical non-profit headquartered in Mesa, Arizona. From this he became known to the local clergy, and eventually was asked to assume the leadership of the small mission in Prescott, Arizona. Within three years, St. George Church in Prescott experienced profound growth and bought the entire complex (Church, offices, House, courtyard, and parking area) of which they were renting only the small Church. Within a quarter mile of the historic downtown Prescott square, St. George began to become more than an old church people walked past. Soon, it became a common sight for Fr. John to appear on local television offering the invocation for the Prescott City Council. He was asked to teach Latin at the local college prep high school, and from there to the Embry Riddle Aeronautical University Upward Bound summer program.

His work experience includes over 30 years of graphic design work, and decades of non-profit administration. He contributed a number of articles for the Orthodox Study Bible and commentary on the Old Testament books of Hosea, Song of Songs, and III Maccabees (perhaps the first Orthodox commentary for this book in existence).

Fr. John published some ebooks, and unexpectedly became an Amazon #1 best selling author. He has written articles for Orthodoxytoday.org, the American Orthodox Institute, The Handmaiden magazine, the Interior Strength blog, the St. Katherine College website, and others. He’s been an occasional writer for Charles Staley’s Staley Training Systems website, and has been featured on the Functional Hand Strength, Theory To Practice, and The Masculine Heart websites.