A Modern Visitation from GreatMartyr Euphemia 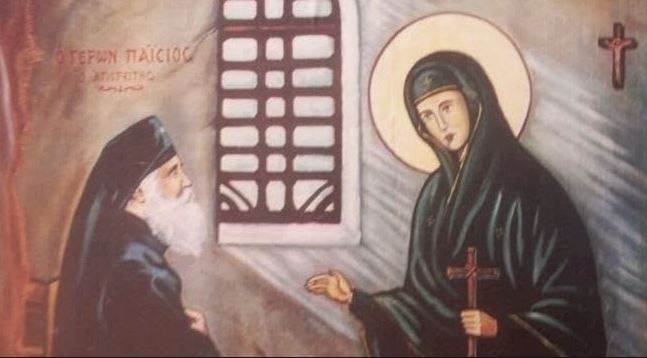 Father Paisios was going through a very difficult phase. A problem was created in the Church at that time and many bishops had gone to him to ask for his help. However, it was a very complicated problem and even if he wanted to, he was unable to assist; as he said, no matter from which side you look at the problem, you come face to face with a spiritual impasse. So, he decided to turn his efforts to solve the problem into prayer. During that time, Father Paisios constantly prayed for God to give solution to the Church’s problem; especially, he prayed to St. Euphemia:

“St. Euphemia, you who miraculously solved the serious problem the Church was facing then, take the Church out of the present impasse!”

One morning, at nine o’ clock, when Father Paisios was reading the service of the third hour, he suddenly heard someone discreetly knocking on his door. The Elder asked from inside:

Then, he heard a woman’s voice answering:

“Which Euphemia?” He asked again.

There was no answer. There was another knock on the door and he asked again.

The same voice was heard saying:

“It is Euphemia, Father.”

There was a third knock and the Elder felt someone coming inside his cell and walking through the corridor. He went to the door and there he saw St. Ephemia, who had miraculously entered his cell through the locked door and was venerating the icon of the Holy Trinity, which the Elder had placed on the wall of his corridor, on the right hand side of the church’s door.

Then the Elder told the saint:

“Say: Glory to the Father and the Son and the Holy Spirit.”

Afterwards, they sat and talked for quite a while; he could not specify for how long, as he had lost all sense of time while being with St. Euphemia. She gave the solution for all three matters he had been praying for and in the end he said to her:

“I would like you to tell me how you endured your martyrdom.”

“Father, if I knew back then how eternal life would be and the heavenly beauty the souls enjoy by being next to God, I honestly would have asked for my martyrdom to last for ever, as it was absolutely nothing compared to the gifts of grace of God!”