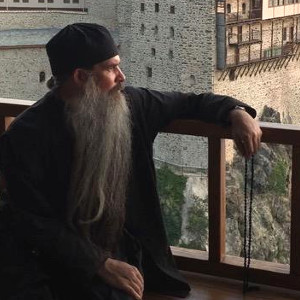 The Very Reverend Father Thaddaeus Hardenbrook, President of St. Euphemia the Great Orthodox Theological Academy, is the presiding priest at Saint Lawrence Orthodox Christian Church, Felton, CA. He serves additionally as catechist at Saint Lawrence Academy (K-8), traveling lecturer, and secretary of the Ecclesiastical Court for the Ecumenical Patriarchate’s Vicariate for Palestinian and Jordanian Communities in the United States.

At the age of seventeen, Father Thaddaeus Hardenbrook converted to Orthodox Christianity, with his extended family, from non-denominational Protestantism. His father, the Very Reverend Father John Weldon Hardenbrook, was formerly a bishop of the Evangelical Orthodox Church; a para-church movement that entered canonical Orthodoxy in 1987 after a decade of researching the history, theology, worship, and spirituality of the first three centuries of Christian history.

In his early life, Father Thaddaeus lived on a Christian ‘hippie’ commune outside Garberville, CA, where young runaways, prodigals, and addicts came to Christ and began to recover healthy relationship skills and the fundamentals for Christian living. This era in the Hardenbrook family provided a foundational experience of Christian community that would later manifest itself as great success on the level of Orthodox Christian parish life. As a young man, Father Thaddaeus loved drawing, reading, motorcycles, and anything involving the outdoors.

Immediately after high school, Father Thaddaeus attended a one-year, residential program at St. Athanasius Academy of Orthodox Theology, Goleta, CA. While earning his Bachelor’s degree in English and American Literature, with a minor in Psychology, he supported himself by successfully mastering landscaping, residential construction (carpentry, plumping, and electrical), and as a certified high school athletic coach. In 1986 he travel to England, France, and Holland while researching family heritage and exploring the Orthodox history and saints of those countries. In 1988 he travel to Russia to celebrate the millennium of Orthodox Christianity there, visiting the major holy places around Kiev, Moscow, and Saint Petersburg.

In 1993 he married the exceptionally beautiful and talented Xenia Somerville (BA; Music Theory and Mathematics), oldest daughter of his father confessor, Father Terry Somerville, began teaching English in an Orthodox high school, and managed the largest Orthodox Christian bookstore on the West coast. Over the next three years, he would earn his Master’s degrees in Literature, with an emphasis in teaching Composition & Rhetoric, and rise to the position of Director of Operations at Conciliar Press Publishing.

In the year 2000, his home parish finding itself in need of additional clergy, and with the blessing of His Holiness Patriarch Diodoros, Father Thaddaeus submitted to ordination to the diaconate in the Dormition Tomb of the Theotokos, and to the priesthood in the Holy Sepulcher of Christ, Jerusalem. In 2005, he was elevated to Archpriest over two assistant priests and two deacons in a cathedral rite setting. In 2009, Father returned to formal theological studies and earned a second Master’s degree from the Orthodox Theological School of Chicago (ROCOR); authoring a significant thesis on “The Orthodox Parish As Community: A Community of Essence, Will, and Activity.”

Father Thaddaeus’ travels include a second pilgrimage to Russia to help restore Old Valaam Monastery (1994), to England to aid the growing number of converts to Orthodoxy there (1998), Jerusalem for a second time (2007), and Greece / Mount Athos (2002, 2017). Stateside, Father Thaddaeus does his best to maintain connections with the monasteries of Saint Herman (Platina, CA), the Living Spring (Dunlap, CA), St. Anthony (Florence, AZ), and Saint Nilus Skete (Kodiak, AK). Among many patrons, Father Thaddaeus is devoted to Saint Sebastian of Jackson and concelebrated his glorification in 2015.

For seventeen years, Father Thaddaeus has served as presiding priest of Saint Lawrence parish. He excels at writing, teaching, counseling, and parish community growth. He is activly involved is aiding the founding and funding of Orthodox schools, high school youth groups, mission parishes, and candidates for ordination.

Currently, Father Thaddaeus, Presbytera Xenia, Joseph (17), Kyriana (15), Daniel (11), and Chrysa (9) live on the family homestead three miles from the church in Felton, CA. The 26 acre, redwood forest property is home to four other Orthodox families and two single men, and adjacent to two large properties owned by other parishioners. It is this type of intentional community and parish family life to which Father Thaddaeus and his fellow clergy and parishioners have committed their lives to. Make contact with Saint Lawrence Orthodox Church at: www.slocc.com.